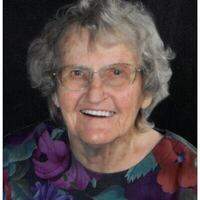 Alice M. Dwyer age 98 of Detroit Lakes, MN died November 14, 2020 in her residence under the care of Hospice of the Red River Valley.

Alice Marion Dwyer was born February 16, 1922 in New York Mills, MN to Knudt and Jane Josephine Miller Nasset. As a young girl her family moved near Richwood, MN, where she grew up and attended country school. She graduated from Detroit Lakes High School in 1941. On April 6, 1941 she married Earl Nelson in Hawley, MN. They made their home in Detroit Lakes. Earl died in 1975. On December 29, 1984 she married Joseph Dwyer in West Fargo, ND. They made their home in Detroit Lakes.

Memorial Services will be held in the spring.

To order memorial trees or send flowers to the family in memory of A. Marion Dwyer, please visit our flower store.