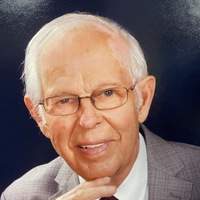 Arland Henry Brase was born on September 21, 1928, in Perham, MN to Herbert C. and Bertha (Bierman) Brase.  Arland was baptized and confirmed at St. Paul’s Lutheran Church in Perham, MN. He attended St. Paul’s Lutheran School through eighth grade under the teacherage of his father. He graduated with honors from Perham High School in 1947. After working in sales for Bauck’s Hardware in Perham, he attended Gail Institute in Minneapolis, MN where he was trained to be a telegraph operator. He was then employed by the Northern Pacific Railway working many railway stations from Staples to Manitoba Junction from 1951-1960.

On June 26, 1954, he married the love of his life Leanda Johnson at St. John’s Lutheran Church near Perham, MN. They made their home and raised their four children in Detroit Lakes, MN. The couple recently celebrated their 68th wedding anniversary on June 26, 2022.

In 1960, Arland resigned his position with the Northern Pacific. He then was employed by The United States Postal Service in Detroit Lakes, MN as a city letter carrier for 10 years.  In 1970, he transferred to Lake Park, MN, as a rural letter carrier for 20 years.

Arland has been an active member of Zion Lutheran Church in Detroit Lakes since 1954. He held many church offices including President of the congregation, Elder, and Stewardship Chairman. He also taught Sunday School and Adult Bible classes for many years. He also chaired many special projects such as building additions, centennial events, and mission activities. He loved the church and his Lord and Savior Jesus Christ.

Arland loved to play tennis which he did well into his 80’s. He and his family spent many summers at their cabin on Big Pine Lake near Perham. Arland and Lea enjoyed entertaining their children and grandchildren with boating, waterskiing and boarding, fishing, swimming, campfires, and feasting. Other interests included traveling, reading, sports, and Bible studies.

To order memorial trees or send flowers to the family in memory of Arland Henry Brase, please visit our flower store.
Open