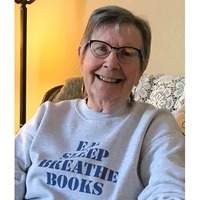 Arlyn Lucille (Johnson) Sands, 84, of Detroit Lakes, MN, passed away Sat. June 5, 2021 with family by her side. She was under the care of Hospice of the Red River Valley & the wonderful staff at The Cottage.

Arlyn was born Aug. 11, 1936 to Ferdinand & Anne (Mackie) Johnson in the small community of Alvarado, MN; second of 7 children. She spent a happy childhood on the farm NW of Alvarado where extended family, neighbors & friends often visited & stayed. Always a bit of a tomboy, Arlyn would rather climb trees than play with dolls. She had a gentle countenance & got along with everyone.

Arlyn’s education began at North Star country school. There her passion for reading was discovered & promoted her from 1st to 3rd grade. She went on to graduate Valedictorian from Alvarado H.S. in 1953 at age 16. Along the way she was Marshall County Spelling Champ & went to the State Spelling B.

Arlyn was baptized & confirmed at Elim Church, a small country church not far from her home. She played piano & often was asked to sing, harmonizing beautifully with older sister, Pauline. Later, as member of Trinity Lutheran, she sang in the choir & taught Sunday School for many years.

Arlyn married Don Sands, her high school sweetheart, on Mar. 10, 1954 in Alvarado. He was the basketball player; she was the cheerleader. For all of their 58 years, they were avid sports fans & best of friends.In 1956 they moved to Detroit Lakes, MN with their young daughter. In the following 7 years they added another daughter, bought a horse, moved to the country, added a son & built a house.

Their attractive home became an inviting destination for frequent visits by family & friends.

Arlyn was a hard worker & very organized, particular about certain things like a tidy home & proper grammar. Always kind & patient, she taught sewing to her daughters & gardening to her son. She was a 4-H leader for several years, teaching others the things she knew & enjoyed. Her life was filled with friends & family; playing piano, singing in Sweet Adeline’s, class reunions, SisterFest, We Fest, crossword puzzles, board games, ball games, train trips, sewing, gardening & of course, reading. In addition to a busy family & personal life, Arlyn worked throughout the years, at Woolworths, St. Mary’s Hospital, the Credit Bureau, Lakeland Federal & Ferrellgas. Each year, she & Don took time off to work the gates at WeFest.  Arlyn got much enjoyment from country living & kept busy in retirement tending her flowerbeds, watching deer pass through the yard & viewing swans on the nearby lake.  Arlyn moved back to town in 2013, living happily at her apartment at Union Central. For the past 3 years her home has been at The Cottage assisted living/memory care where she won the hearts of staff by playing piano, dancing, helping in the dining room, hanging out & just being “Arlyn”.

To order memorial trees or send flowers to the family in memory of Arlyn Lucille Sands, please visit our flower store.