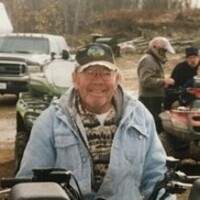 Charles Grant Stenseth was born February 29, 1944 to Melvin and Hazel Stenseth in Kindred, ND. He attended Kindred Public Schools and graduated from Kindred High School. The day after graduation he got a letter from Uncle Sam wanting him to join their team. He enlisted in the Navy and did twenty years, retiring in the Great Lakes region. He saw a lot of the world and earned the rank of Bosun’s Mate. He loved to show off his “hand signature tattoo” whenever he ran into a retired fellow sailor. Charles lived in Illinois for several years and worked for a tree trimming company. Charles loved to fish and even enjoyed going out alone. He loved living across the highway from the lake. His neighbor, the one he bought the house from told him when he moved in that Charles had permanent lake rights until he pissed him off. And of course, that never happened. One of the proudest moments in Charles’ life is the fact that his hair never turned gray like his much younger brother’s. Some brothers can be so annoying – no matter their age. Charles was a son, brother, father, uncle, grandfather, husband, and most of all a good friend. Always willing to help anyone who needed an extra hand. He loved his ATV’s and was always pulling someone out of an embarrassing situation. Charles is survived by his wife Joanne, brother Scott, sister Judy, son Charlie Jr., daughter Jody and numerous nieces, nephews, and grandchildren. Preceded in death were baby brother James, mother, father, stepfather, nephew James and many other family members. Thank you to all of Charlie’s friends for helping to celebrate his life. In lieu of flowers, please donate to the charity of your choice.
To order memorial trees or send flowers to the family in memory of Charles Grant Stenseth, please visit our flower store.