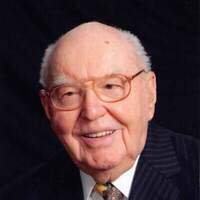 Dennis M. Anderson was born in Detroit Township on January 13, 1924, the son of Alfred A. and Odena (Odegaard) Anderson. He attended rural school and graduated from Detroit Lakes High School – class of 1942.

He married Gladyce S. Bakken on December 1, 1946. They lived in Detroit Lakes, MN; Dickinson, ND; and fifteen years in Hawley, MN before returning to Detroit Lakes in 1968.

Dennis spent a major part of his working years in sales; the last twenty-five years with IDS – American Express, retiring in 1988.

While living in Hawley, they owned and operated a Dairy Soft Ice Cream Drive-In; and later was partner in the Sahlberg, Anderson Chevrolet and Oldsmobile Garage. Dennis was active in the church and served as President of Hawley Lutheran Church and President of Hawley Chamber of Commerce and was a member of the new business development and the Hawley Rodeo Association.

In Detroit Lakes, as a member of First Lutheran Church he was on the Church Council and served as President of the Congregation. He was instrumental in organizing the First Lutheran Foundation and served as its first president. Dennis was also one of the original members of the men’s “Brown Baggers” bible study group. He loved to sing and was part of the church choir for fifty plus years.

Dennis and Gladyce loved to travel in their motor home, covering the “50 States.” Winters were usually spent in the Rio Grande Valley in Texas. They were also fortunate to spend time visiting the Scandinavian Countries twice.

Another love of Dennis’ was antique automobiles, having a number of them over the years. Dennis was a member of the “412 Lakes Antique Auto Club”, and the “412 Lakes Camping Club”. Other hobbies included hunting and fishing with his son and grandsons.

He was preceded in death by his first wife, Gladyce on October 1,2006; one son Jerre Dennis; one sister, Bertha Pearson and brother-in-law, Bob Pearson; and his parents.

To order memorial trees or send flowers to the family in memory of Dennis Milton Anderson, please visit our flower store.