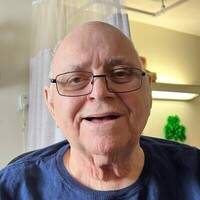 Duain Haman age 75 of Fargo ND, died April 18, 2022 at the Viking Manor Nursing home in Ulen MN. Duain Louie Haman was born May 9, 1946 in Rugby, North Dakota to Adam M and Juliana (Kuntz)Haman. Duain was born number 6 in the line of 12 children to on Mother’s Day on May 9th 1946. He grew up on a farm in North Dakota graduated from St. James Academy in New Rockford in 1965. After graduating from high school, he went into the Army and was stationed in Germany till April. After serving in the Army and coming home he met his wife Barbara at a party in 1969. They married in 1970 and spent the next 51 years 11 months together. They had two daughters together. Duain worked many jobs in his life but his greatest joy and job was being a grandpa to his three grandchildren. He had an infectious laugh and smile and loved to talk to others. He is survived by his wife Barbara Haman, his daughters; Lisa Haman, Jody Ballard (Travis), his grandchildren; Ethan Haman, Lacey Ballard, and Hailey Ballard. His 11 Siblings, four Brothers Leroy Haman (Chris), Joe Haman, Ray Haman, Ed Haman, seven Sisters, Lorraine Bourdeau, Doris Gross, Rita Haman, Irene Valstad (Larry), Donna Berglund (Myron), and Barbara Lebarr (Tim), Angela Charpentier (John). Countless nieces and nephews and so many friends. He is preceded in death by his parents, Adam M and Juliana Haman, nephew Damian Valstad. He was dearly loved and will be greatly missed.
To order memorial trees or send flowers to the family in memory of Duain Louie Haman, please visit our flower store.