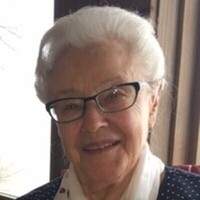 Erma graduated from Bagley High School in 1942 and the Pine River Teachers Normal School in 1943.  She then went on to teach in Clearwater County Rural Schools for the next 4 years.  On June 20, 1947, Erma married Arnold R. Hoseth and moved to Detroit Lakes, Minnesota.

She taught in Becker County Rural Schools for 8 years before starting her career with the Detroit Lakes Public Schools.  She taught from 1956 until retiring in 1983, working at Washington and Rossman Elementary Schools.  During this time, Erma earned her Bachelor of Science Degree from Moorhead State University in 1965.

She was actively involved with the Detroit Lakes Library Club, Lakes Area Education Association and REAM.  She was a member of the Garden Club for many years.  Her hobbies included gardening, puzzles, gathering shells on the beaches of Florida and reading.

Erma had a special place in her heart for young people and was always interested in their lives.  She had a great influence on others with her kindness.  Her faith was evident by the way she lived her life.

Erma is Survived by her brother in-law Sherman Hoseth, numerous nieces and nephews, and their families.

She was preceded in death by her husband Arnold in 2013; her parents; 3 brothers, Julius, Donald and Amos Nelson; and sister Elsie Ferrie.

To order memorial trees or send flowers to the family in memory of Erma Martha Hoseth, please visit our flower store.