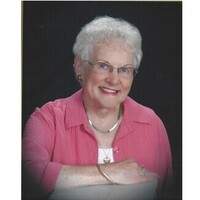 Esther Lorraine Tinge was born to William and Elsie (Heuer) Tinge on October 15th, 1928 in Renville County, MN (near Cosmos, MN).  The family moved to Princeton, MN in 1936, where Esther graduated from Princeton High School in 1946.  After graduation, she worked as a telephone operator and service representative for Northwestern Bell Telephone Company in Princeton.  On August 6th 1949, she married Kenneth (Pete) Lindgren in Princeton.  Their family lived in several Minnesota towns before moving to Detroit Lakes, MN in 1959.  Esther was a stay-at-home mother until she took a job as an Instructional Aide at Rossman Elementary School in Detroit Lakes, where she worked from 1975 to 1991.  Esther was an active member of First Lutheran Church and belonged to the Naomi Circle of Women of First Lutheran Churches.  She also belonged to the Emmanuel Nursing Home Auxiliary.

To order memorial trees or send flowers to the family in memory of Esther Lorraine Lindgren, please visit our flower store.