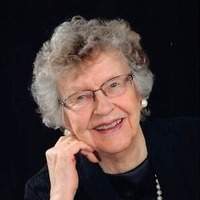 Evelyn was born December 14, 1922, in Clearwater County near Bagley, MN to Gunder and Gina (Iverson) Boe. She graduated from Bagley High School in 1941. On December 14, 1941, Evelyn was united in marriage to Arthur Rusten. They lived in Mississippi, Louisiana, Oklahoma, Kentucky, and Minnesota while Arthur was in the armed services. Following his discharge, they lived in Walker, MN for 10 years and Pelican Rapids for one year before moving to Detroit Lakes in 1957. She worked at Norby’s Department store for 23 1/2 years, retiring in 1985.

Evelyn enjoyed spending time with her family and friends, volunteering, cooking, baking, and playing cards, especially Bridge and Whist. She volunteered at the Senior Nutrition Center and St. Mary’s Hospital and was active at First Lutheran Church teaching Sunday School and serving on the church council. She was also a long-time member of the Better Halves Homemakers Group where she made lasting friendships.  Evelyn was an excellent seamstress and enjoyed doing handwork, especially Hardanger embroidery. Another favorite hobby was collecting gold rimmed depression glassware. She was proud of her Norwegian heritage and took great pride in teaching her family to make lefse and krumkake.

Evelyn is preceded in death by her parents, husband Arthur, brothers Elvin, Melvin, Arnold and Russell, and sister Elvira.

Evelyn’s family wishes to express their sincere thanks for all the expressions of love during their time of bereavement.

Funeral services will be held at 1:00 PM on Wednesday, October 20, 2021 at First Lutheran Church in Detroit Lakes with Pastor Lauryl Ivers officiating.  Interment will be in Oak Grove Cemetery. Visitation will be 1 hour prior to the service at the church. West-Kjos Funeral Home is serving the family.

To order memorial trees or send flowers to the family in memory of Evelyn Geneva Rusten, please visit our flower store.
Open