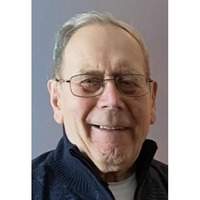 Francis E. Gunderson was born January 25, 1929 in Fargo ND. He was the son of Gunder and Ida (Rishovd) Gunderson.

Francis grew up in Detroit lakes, MN. Graduated from Detroit Lakes High School and was confirmed at First Lutheran Church in 1948.

He enlisted in the Army that summer and qualified for the Ceremonial Regiment “Old Guard” 3rd Infantry Regiment Washington DC, which is considered the elite of the elite. He was a Presidential Guard and Marched at the Tomb of the Unknown Soldier and participated in   burials at Arlington National Cemetery. He then went to Germany to serve 2 years at General Eisenhower Headquarters. Francis was a life member of the VFW and Eagles Club.

He graduated from the Detroit Lakes Business College and Gale Institute, Minneapolis. This started his Railroad career. He worked as a code and teletype for Santa Fe Railroad, Winslow, AZ., then to Washington, DC as a Tower Operator.

He then moved back to Detroit Lakes to help his mother in the Hotel Business. He married the love of his life, Barbara Broughton on November, 6th 1955, they moved to West Fargo, ND. where they raised their 5 boys. He worked at Armor Co. for 25 years, and decided to take an early retirement, only to start at Ole’s Nursery for the next 25 years. He retired to Lake Eunice where he and his wife loved their dogs and reading. Francis enjoyed reading any book on the Civil war or WWII.

Services will be at West Kjos Funeral Home on July 8th, viewing will begin at 9:00 with the service to follow at 10:00 AM. Interment will be at St Peters Rural Lutheran Church, Audubon, MN.

To order memorial trees or send flowers to the family in memory of Francis Eugene "Bud" Gunderson, please visit our flower store.
Open