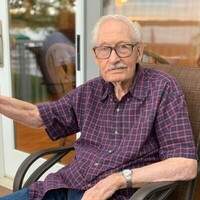 Frank was born on November 4, 1925 to parents Lloyd Hutchinson and Alma (Rambol) Hutchinson at their home in Euclid, MN, the second of six children.  Frank attended primary school in Euclid and later in Baudette, MN, where the family relocated for a time.  Subsequently the family bought a one section farm in rural Greenbush, MN and made it their permanent home.  Frank was a good student and graduated with an “A” average from Greenbush High school, Class of 1943.

In January 1945 Frank joined the U.S. Maritime Service and attended its Sheepshead Bay, NY training station.  He continued to serve in the U.S. Merchant Marine until 1948, attaining the rank of Lieutenant (Junior Grade).  While in the service Frank traveled widely to ports around the world.  One memorable voyage found his ship and crew transporting captured German armaments from Europe to the United States for study by Army researchers.

After leaving the sea, Frank returned to Minnesota, first working on the family farm and later as a heavy equipment operator in the iron ore mines near Hibbing, MN.

During these years Frank met and courted Florence Novacek, also from Greenbush, while she worked as a registered nurse in the area.  They were married at Blessed Sacrament Catholic Church in Greenbush on January 2, 1952.  The marriage was blessed with four children, Tom, Dave, Mike and Kathy.

In 1954 the family moved to Detroit Lakes, MN and Frank began his lifelong occupation as a long haul trucker.  He continued in that occupation for nearly fifty years until he retired at the age of 76.  During that time, he visited nearly every state in the Union, including Alaska, logging well over one million miles.

Frank always remembered his youth farming with horses in northwestern Minnesota.  He loved attending horse shows at the State Far, rodeos in Hawley and the National Rodeo Finals in Vegas with his sons.  A country music fan, Frank attended almost every We Fest celebration held in Detroit lakes from its beginning until 2019.

Frank was a quiet man but also a good storyteller.  His grandchildren delighted in coaxing him to tell stories of his travels in the Merchant Marine, or farming with horses during the years before WWII, or logging with a partner and a team of horses near Cass Lake, MN.

Frank was devoted to his family and especially to his wife of 67 years, Florence.  He cared for Florence in her final years at home when her health declined, always with no fuss or complaint.  He retained his sense of humor and ready smile until the last.

Frank is preceded in death by his wife Florence, parents, his brothers Charles Eugene (Genie), Raleigh and Dwaine, sisters Adeline and Donna.

The family extends its thanks to Hospice of the Red River Valley and especially to the Emmanuel long term care staff for their vigilant care of Frank.

There are no gallery images.

To order memorial trees or send flowers to the family in memory of Frank Lloyd Hutchinson, please visit our flower store.
Open