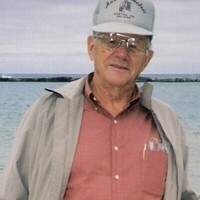 Glen Ira Birky was born near Shickley, Nebraska to Amon and Katie (Troyer) Birky on October 23, 1920. At age 8 months, the family moved to Montana where they lived for five years. They then returned to Shickley, where Glen lived until 1961, before moving to Minnesota.

Glen enjoyed school, but grade eight was the last grade of formal education. Later, he spent one term at Hesston College Bible School. He was baptized in his youth and became a committed member to the Salem Mennonite Church. It was there on October 30, 1941, Glen married Erma Louise Kennel. They celebrated their 64th wedding anniversary days before her death on November 4, 2005.

Glen enjoyed farming but was also committed to service in the local and global church. He taught Bible School in Colorado; served as treasurer for the Iowa-Nebraska Mennonite Conference; served on the General Mission Board of the Mennonite Church, as well as conference responsibilities in Minnesota.

In 1961, Glen accepted an invitation to join the pastoral leadership of Lake Region Mennonite Church near Detroit Lakes, MN.  A move was made, and this area remained home for the next 59 years. Besides pastoring, he became a trucker, buying and selling grain as well as farming. In his later years, Glen served as a volunteer for Hospice of the Red River Valley.

Glen shared his deep faith in conversation and in service. While farming, trucking, or attending a family gathering or church conference or committee meeting; his central concern was the spiritual commitment of those around him.

Preceeding him in death were his wife, Erma; daughter-in-law, Shirley; great grandson, Dustin; three brothers; four sisters; and his parents.

Funeral Services will be held outdoors at the Lake Region Mennonite Church on Saturday, September 5, 2020 at 11:00 a.m. Visitation will be on Friday from 5:00 – 7:00 p.m. at the West-Kjos Funeral Home in Detroit Lakes and one hour prior to services at the Church. Interment will be in the Church Cemetery.

The family would like to thank the staff at Ecumen – Emmanuel Nursing Home and Hospice of the Red River Valley for the care they provided to Glen and the family.

To order memorial trees or send flowers to the family in memory of Glen I. Birky, please visit our flower store.