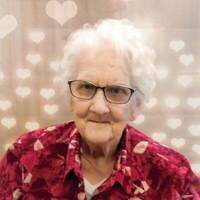 Gunda Helene Gilbertson was born November 22, 1934 in Bagley, MN to George and Esther (Hansen) Rud.  She is a 1952 graduate of Bagley High School.  She took her Normal School training in Grand Forks, ND and later earned her teaching degree from Moorhead State Teachers College.  Gunda began teaching in Frazee, MN in 1954.  She originally taught in 1 room schoolhouses.  She taught elementary school in Frazee until her retirement in 1993.

Gunda and Vernon Gilbertson were united in marriage on June 18, 1955 in Shelby, Montana.  They had 4 children: Greg Gilbertson of Detroit Lakes, Vernette Gilbertson of Wolf Lake, MN, Stacie (David) Zinniel of Park Rapids, and Aaron (Jen) Gilbertson of Duluth.  Vernon died January 16, 1992.  Deb (Bratlien) Gilbertson was Gunda’s daughter in every way that counted.

Gunda loved her family, quilting, the color yellow, baking, and collecting Santa Clauses.  She was an active member of Trinity Lutheran Church in Detroit Lakes.

In lieu of flowers, please send memorials to Trinity Lutheran Church in Detroit Lakes or the American Cancer Society.  Gunda would also encourage you to do something to brighten someone’s day in a simple way.  A hug, visit, or a gift of cookies were her favorite ways to brighten the day of those around her.  West-Kjos Funeral Home is serving the family.

To order memorial trees or send flowers to the family in memory of Gunda H Gilbertson, please visit our flower store.