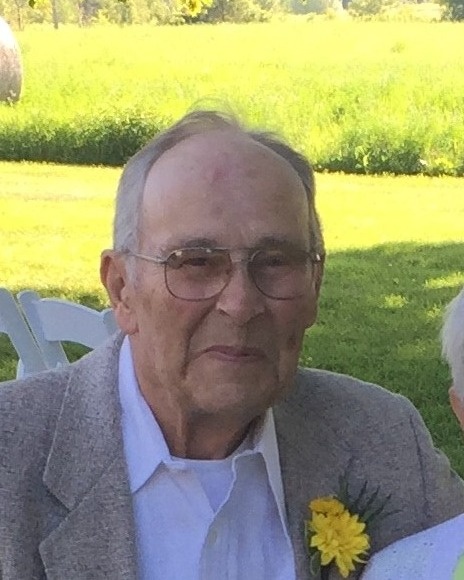 Harold Herbert Triebenbach passed away at his home in Detroit Lakes, Minnesota on Thursday September 29, 2022.  Harold was born in Alexandria, Minnesota on November 22, 1928, to Robert and Bertha (Wenzel) Triebenbach.  Harold graduated from Clarissa Minnesota High School in 1947.  Harold and his wife of seventy-two years, Ardella met in Clarissa and were married on October 28, 1950, at St. Mathews in Germania Township, Todd County, Minnesota.

One of Harold’s first jobs was working on the construction of the Garrison Water Reservoir in Riverdale, North Dakota.  Next, he moved to work on the construction of the taconite processing facility in Two Harbors, Minnesota.  Harold and Ardella moved their family to Detroit Lakes in 1958 where Harold was employed by the Minnesota Department of Transportation.  Harold was employed as a heavy equipment mechanic, and later as the shop foreman at the MN DOT for 29 years.  Harold retired from the MN DOT in 1987.

Harold and Ardella raised three sons and one daughter.  Harold was elected to three consecutive terms on the school board of the Detroit Lakes Public Schools.  Harold served in multiple offices, and committees for the boards of Zion Lutheran church, Detroit Lakes, Minnesota.  Harold enjoyed working outdoors on his farm acreage, raising cattle and small grain crops.  He also enjoyed remodeling Harold and Ardella’s old farmhouse and farm buildings on their farm acreage.  During their retirement, Harold and Ardella wintered in Texas multiple years.  They were also members of the Headwaters Good Sam RV camping club.

Harold was preceded in death by his father, Robert, and his mother, Bertha, four brothers, and three sisters.  He is survived by his wife Ardella, and his four children, Keith (Colleen), Sandra (Russ), Jonathan (Paula), and Miles (Dorinda), eight grandchildren, and four great grandchildren, and his younger brother Robert Jr.

A funeral service will be held on Wednesday, October 5, 2022, at Zion Lutheran Church 1100 Lake Ave, Detroit Lakes, Minnesota at 11:00 AM.  A visitation with the family will be held Tuesday, October 4, 2022, from 5 to 7 PM at Zion Lutheran Church Detroit Lakes, Minnesota, and one hour preceding the funeral service on Wednesday.

Memorials are requested by the family to be given to Zion Lutheran Church, Detroit Lakes, Minnesota.

A Visitation will be held 1 hour prior to the Service.