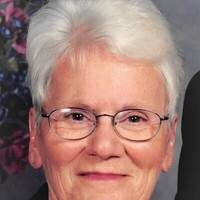 Janet Lee Johnson was born April 21, 1933 in Springfield, Illinois to Melvin and Helen (Eakis) Caskey. She grew up and attended school in Williamsville, Illinois, graduating from high school there. On November 5, 1955 she was united in marriage to Leo Johnson in Fargo, ND. They made their home in Fargo. In 1975 they moved to Fergus Falls, MN, where she worked for Ottertail Power Co. Following their retirement Janet and Leo moved to their summer home on Little Floyd Lake near Detroit Lakes, MN.

Janet was very family orientated. She loved spending time with her family and hosting family gatherings. She also enjoyed playing cards, flower gardening, and living at the lake.

She was preceded in death by her husband, Leo; three sisters, Donna Bottorff, Phyllis Oschwald, and Martha Peratt.

Memorial Services will be held at a later date.

To order memorial trees or send flowers to the family in memory of Janet L. Johnson, please visit our flower store.