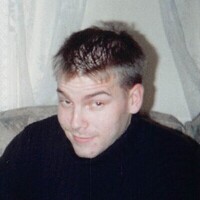 Justin M. Mayberry was born October 23, 1978 in Detroit Lakes, MN to Sandra Mayberry and Richard Laine. He attended school in Frazee, MN and Perham MN. At the age of ten he moved to the twin cities to live with his maternal grandparents, Vern and Donna Mayberry in Crystal, MN. He attended Hosterman Junior High in Robbinsdale, MN and Cooper High School in New Hope, MN. Due to kidney stone surgeries he missed earning his high school diploma by one credit, but later earned his GED.

Justin worked at various bar/restaurants in Minneapolis until his chronic kidney stones made it impossible to work. His last attempt to work was at the Marriott Hotel in Detroit Lakes.

Justin loved spending time with family and friends. He enjoyed watching Jeopardy with his grandma/ma. He loved to learn, his memory for information will be missed. He had a patience for kids, a quick wit and a very special hearty laugh. He also liked to work on cars and cook. He made some very tasty meals.

On Monday June 7, 2021 Justin had a one vehicle rollover in Wadena, MN and passed.

He was preceded in death by his grandfather; two brothers; one nephew; and an uncle.

Funeral Services will be on Thursday June 17, 2021; 11:00 a.m. at the West-Kjos Funeral Home in Detroit Lakes. Visitation will be one hour prior to services. Interment will be in the Zion Lutheran Cemetery, Toad Lake Township, MN.

To order memorial trees or send flowers to the family in memory of Justin Micheal Mayberry, please visit our flower store.