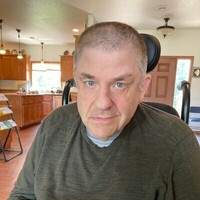 Kirk was born on July 19, 1960 to Orval and Marjorie Nail in York, Nebraska.  Kirk moved to Park Rapids, MN as a teenager and later moved to Detroit Lakes, MN, where he resided until his passing.  Kirk enjoyed outings in the community; some of his favorite places were the West Forty in Park Rapids, KFC, any place that served a good seafood dinner and don’t forget the coke and candy bar!   Kirk was an avid Vikings and Minnesota Twins fan; he had the opportunity to attend some games in the Twin Cities and often had the game on the TV.  Kirk was a person who had a rambunctiousness about him at times, leading to some great relationships with people who worked with him.  Kirk had a tender and understanding heart.  He connected with people on a personal level.  He knew family is important.  Kirk took care of the people who he felt needed him; and there were many.

Kirk was preceded in death by his father, Orval, and his mother, Marjorie.

He is survived by his sister, Patsy Goodman, brother, Randy Nail, and brother, Michael Barber.

No Services at this time.

To order memorial trees or send flowers to the family in memory of Kirk William Nail, please visit our flower store.