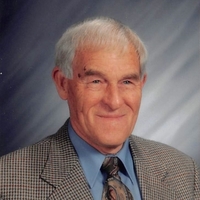 Lawrence (Larry) Burgeson was born in Anoka, Minnesota to Myra McCrillis and Lawrence Wilhelm Burgeson on August 8th, 1924. Shortly thereafter, the family moved to a small farm north of Remer, Minnesota, where they lived in a log cabin built by his father. There was no electricity or anything modern, so they live like early pioneers. His father taught school in the little one room school house where he and his siblings attended school. Larry was the eldest of six children and was often in charge of much of the work that needed to be done around the homestead.

In 1941, he went to Maplewood Academy, a boarding school in Hutchinson, Minnesota. After graduation, he was drafted in the Army where he served as a surgical technician for nearly three years. Two of those years were served in Europe during The Battle of the Bulge in the Army of occupation. After receiving his Army discharge, he went to Union College in Lincoln, Nebraska where he majored in Bible and History. Upon graduation, he accepted a position as a pastor in the SDA church of Minnesota. After four years he decided to change careers, and he became a home building contractor in the Wayzata area where he built many houses.

Music was always an important part of his life. While living in the Minneapolis area, he sang with the Minneapolis Apollo Club for 10 years. Their choral group recorded many albums and sang for the movie Seven Wonders of the World. One of their highlights was traveling to Washington DC to sing at President Eisenhower’s inauguration in 1953. It was quite an honor.

The next phase in life was getting into education. He went to the University of Minnesota and got his teaching certificate for K-12 and special education. He was building on the rooftop of a house one day when the superintendent of Wayzata schools climbed up the ladder and asked him to come teach in his district. He taught special education for five years in Wayzata. During this time, he met and married Karen Hladik in 1965. In 1966 they moved to Detroit Lakes where they bought a small cabin on Dead Shot Bay and Larry built on a large edition to make it their forever lake home. Larry taught at Rossman Elementary for 32 years.  Mr. “B” will be fondly remembered by hundreds of students who were lucky to sit in room 109 and listen to his stories, take apart lawn mower engines, do science experiments, and be touched daily by his kindness and compassion for each of them.

Larry was active in the local teacher organization. He served as president for several years. He retired in 1998 but that didn’t keep him out of the schools. He was frequently asked by various schools to speak about his World War II experiences. He loved to stay active and be a part of his community.

He was preceded in death by his eldest daughter Judy (James) Pogue. He leaves to mourn his wife Karen, sons Jack (Deb), John (Stacy), Larry (Ann Marie), and daughters Jill Gilbert and Nicole (David) Johnson, as well as 14 grandchildren and 11 great grandchildren and many nieces and nephews.

To order memorial trees or send flowers to the family in memory of Lawrence Junior Burgeson, please visit our flower store.