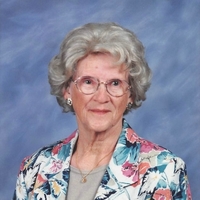 Lois was born on December 21, 1918 in East Bethel, MN to Mary Esther and Arthur C. Anderson. She grew up in East Bethel on the family farm and attended country school, District 22, through the eighth grade. Lois continued her education at Columbia Heights High School, Columbia Heights, MN graduating with the class of 1936.

Following graduation Lois worked in Minneapolis, Chicago, at home on the farm and in Cambridge, MN. In 1943 she packed her brown suitcase and traveled to Washington, D.C. where she found employment as a clerk/typist at the Pentagon in the Department of the Cargo Port of Embarkation.

While living in Washington, Lois met and married her soldier husband, Arland Wisted, of Detroit Lakes. Following Arland’s discharge from the U.S. Army, they made their home in Detroit Lakes where they raised their family. Lois and Arland were married for 73 years.

Lois worked outside of the home as a secretary for both the Detroit Lakes Senior High School Guidance Department and for the First Lutheran Church. She also was a bookkeeper for the Wisted Bros. Hardware Hank during the time her husband and brother-in-law were owners.

Lois kept busy! As a dedicated member of First Lutheran Church, she served in many different capacities; her favorite activity was sewing quilts with the FLC Women’s’ Quilters. She was a Cub Scout troop leader and a Campfire Girls’ troop leader. You can bet there were always delicious treats for the kids at those meetings. She belonged to several bridge clubs, a sewing club, a birthday club, a library club, Ecumen Auxiliary and the Sons of Norway. In the 1970s she took up the hobby of shooting trap at the Becker County Sportsman’s Club alongside her husband. Always a Twins fan, she rarely missed listening to or watching a Twins game. The Price Is Right television game show held her attention during the week days from 10 am to 11 am, and it was not a good move on anyone’s part to interrupt her during that time.

She is preceded in death by her husband, her parents and three brothers Frank, Lawrence and Philip.

Funeral Services will be at 2:00pm on Friday, December 20, 2019 at First Lutheran Church in Detroit Lakes. Visitations will be 3:00-6:00pm on Thursday, December 19 at West-Kjos Funeral Home and one hour prior to services at church. Burial to be at a later date.

To order memorial trees or send flowers to the family in memory of Lois Esther Wisted, please visit our flower store.