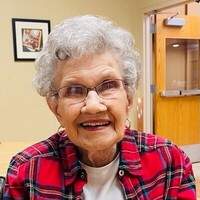 Lucille Margaret Kaiser was born February 20, 1927 in Audubon, MN to Thomas and Agnes (Hanson) Madson. She attended District 21 Country School near her home thru the eighth grade. She then attended Lake Park High School, graduating in 1945. Lucille then worked at Jordahl’s Grocery Store in Lake Park for a number of years. On November 11, 1949 she was united in marriage to Arvid Kaiser. They made their home in Lake Park and later moved to  farms near Audubon and Detroit Lakes. Lucille and Arvid divorced in 1978 and Lucille moved into Detroit Lakes, where she worked as a Baker at the Red Owl Store. She retired at the age of 62.

Lucille always enjoyed helping others when there was a need. She served as a volunteer for Meals on Wheels. Her interests included gardening, canning, baking, bingo, and handywork. Over the years she entered many of her things in the Becker County Fair, winning numerous ribbons. She also enjoyed traveling and camping. Some of her favorite trips being Norway and Sweden, the western United States and Hawaii. She is remembered as being a “Good Sport”, who was always willing to try anything. Time spent with her family was very precious to her.

She was preceded in death by her parents; one brother, Donald Madson; and one sister Delores Johnson.

To order memorial trees or send flowers to the family in memory of Lucille Margaret Kaiser, please visit our flower store.