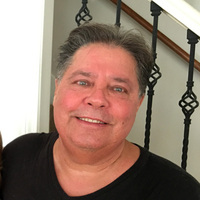 MARCUS SHOR WARYAN, age 65, son of Jack and the late Blanche Waryan was called home by the Lord, due to complications related to the COVID virus.

MARCUS spend his younger years growing up near the Bois De Sioux Country Club in Wahpeton, ND. In 1968, the family moved to Detroit Lakes, MN on the shores of Deadshot Bay, and he, along with his brother, received their first Yamaha motorcycles for Christmas, developing his lifelong love for riding. Later in life, he, and his son, together, refurbished those same motorcycles. He graduated from Detroit Lakes High School, where he competed on the varsity swim team, lettering 4 years in a row and held the school record in the 100-yard butterfly. He also won several 100-yard freestyle competitions.

MARCUS joined the United States Marine Corps in August 1974, where he served in Battery H, 3rd Battalion, 12th Marine Regiment, BLT 2/4, 3rd Marine Division as a Field Artillery Batteryman.  He qualified for the Rifle Expert Badge and earned a Good Conduct Medal. During his free time, he focused on his passion for music by continuous learning to play guitar. His service in the Marine Core ended Honorably in August 1976.

MARCUS met the love of his life at Joseph’s School of Hair Design in the fall of 1976. He spent his day’s diligently chasing this hazel eyed girl, Roxanne. After they graduated in the spring of 1978 they moved to St. Louis, MO together. After cutting hair for a year, he moved onto the next chapter of his life, lead guitar. His first band he played in was Grand Isle, then moved onto Baden Rhode, playing lead guitar until 1982. He turned the page, returning to school, graduating with an associate's degree in electronic engineering, then working for Automatic Data Processing, and finally marrying that hazel eyed girl, Roxanne on November 21st, 1984. To their joyous surprise, their daughter Annissa Marie entered the world in July 1988. The family was completed June 1990 with the birth of their son Alex John.  In 1996, he was promoted to regional manager and moved his family to Olathe, KS. In 2006, he enjoyed working as a Real Estate agent and helped families find their future homes.  He returned to IT, focusing on networking, and earning Cisco certifications. After receiving his certifications, he went to work for Sprint, now T-Mobile and has happily worked there until his passing.

MARCUS could often be found in his office trying to learn how to play new songs on his guitar by ear, watching old music videos, and chatting on Facebook with his family. He enjoyed long motorcycle rides with Roxy and his children. Fatherhood was a joy to him, as he watched his children participate in several after school activities and sports. The family always looked forward to summer vacations in the Detroit Lakes area. Marcus always looked forward to his winter golf trips with his brothers-in-law.  His greatest accomplishment was beating his brother-in-law on the last hole with a 50-foot putt to win the Snowbird Golf Getaway Traveling Trophy.

In leu of flowers, please make donations to the following animal shelters: Humane Society of the Lakes, Detroit Lakes, MN; humanesocietyofthelakes.org or Wayside Waifs Animal Shelter, Kansas City, MO; waysidewaifs.org per Marcus’s wishes as he had a great love for animals.

To order memorial trees or send flowers to the family in memory of Marcus Shor Waryan, please visit our flower store.