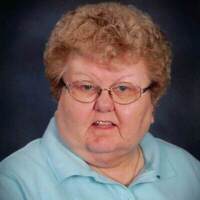 She married Robert Martin Jernberg and lived in Cass Lake and Bemidji while attending college. In 1965 they moved to Hibbing, MN and then to Moorhead, MN in 1967. Marilyn worked for St. Luke's hospital in Fargo (now Sanford)  as a ward clerk and later in patient education. She retired in 1994. In 2003 she and her husband Bob moved to Detroit Lakes, MN. Marilyn loved and was dedicated to the Lord and enjoyed many favorite hymns and watching the Gaither TV programs. Marilyn truly enjoyed camping and traveling with her husband to many places. Favorite destinations were Itasca Park, Hawaii, Orlando, Las Vegas, Scottsdale and Myrtle Beach. She loved musical performances, sporting events and spending time with her grandchildren and great grandchildren.

Marilyn was preceded in death by her parents Harlan and Irene Peterson and sisters Shirley (Paul) Owen and Joanne (Don) Wolf.

To order memorial trees or send flowers to the family in memory of Marilyn Irene Jernberg, please visit our flower store.