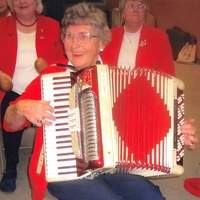 Marion Barbara (Mistelske) Schattschneider passed away peacefully in her home under the care of Hospice of the Red River Valley on November 21, 2019.  She was born to Joseph and Anna (Trautner) Mistelske in Vergas, MN January 21, 1930.  She is the last of nine children. She was baptized in the Methodist faith at age 10 and enjoyed 25 years in that church in the choir and by teaching Sunday school.   She was confirmed in the Lutheran faith in 1954 prior to her marriage to Donald Schattschneider on August 26, 1954.

She graduated from Vergas public school in 1948, a class of 48 students.  Her love of music playing baritone and tuba in band led to college at Minnesota State Technical College joining their band and earning an Elementary Education Degree.  She advanced on in 1968 to Minnesota State University Moorhead to complete her degree in Bachelors of Science in Education. Her early teaching jobs in rural district schools 98, 237 and 121 (as a country school teacher in a single room school house only warmed by a wood stove). She had seven years of first grade at the Frazee school district, then 10 years in the Detroit Lakes district between Rossman and Washington elementary teaching sixth grade and special education. She influenced many people’s lives over time and is fondly remembered by her students as “Miss Marion”.

Marion was humble and generous in nature. She cherished everyone she met and was grateful for them all.  She was most grateful for her family and friends, always offered a kind smile and an impartial listening ear or shoulder to any who needed it. She enjoyed her bonfires, coffee and to visit with those friends and family she held so dear.

One of her greatest joys has been in volunteering playing music and leading those musical groups that include the largest of 29 members the “Ding-A-Lings” followed by other smaller groups such as the “Happy Wanderers” all entertaining and performing in lakes area nursing homes. A huge love for the elderly and handicapped people led to her volunteering in many places as a reflection of her faith and love of music.  She had countless hours of volunteering that earned her the awards of “Senior of the Year” and “Volunteer of the Year” for Becker County. Her love of music was also paired with her love of animals and nature.  She also cherished her time spent with her “other family” of special bingo friends.

Celebration of her life service will be Sunday, December 1 at 2:00 PM at West Kjos Funeral home.  Her family invites you to join them on this blessed Sunday. Please stay for coffee and refreshments following the service.

To order memorial trees or send flowers to the family in memory of Marion B. Schattschneider, please visit our flower store.