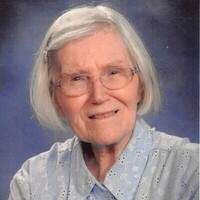 Mavis (Klopke) Coleman died peacefully on February 18, 2021, at The Cottage assisted living facility in Detroit Lakes. Mavis was born in Detroit Lakes on Christmas Day, 1923, the daughter of George and Hilda (Schnitzer) Klopke and grew up on a farm in Erie Township. She attended elementary school in a one-room schoolhouse and graduated from Detroit Lakes High School in 1941.

After Pearl Harbor she enrolled in a vocational training course to learn welding and metal working. She moved to St. Paul where she was a true “Rosie the Riveter”, working at Holman Field airport converting cargo planes into troop carriers.

On December 19, 1942, she married Benton Coleman and the couple moved to Lake Park where they farmed until 1957. They then farmed near Detroit Lakes until 1977. In 1979 they moved into Lamplighter Manor where she lived until 2018 when her dementia required her get more care and she moved into The Cottage.  Besides farming, Mavis was a longtime employee of Sears where it seemed she got to know almost everybody in Detroit Lakes.

Mavis was a lifelong member of Zion Lutheran Church where she was active in ladies’ circle and Bible study. She loved to socialize and play cards. While they were living on the farm, she and Ben would drive to a friend’s house nearly every Friday evening to play pinochle, whist, canasta, or poker. Even as her dementia began to make conversations difficult, she loved to play Kings in the Corner for hours at a time. After her husband died, she began to travel extensively with her sister Marion. Together they took bus trips all over the United States and Canada and toured Europe, the Holy Land, and Australia.

She is survived by two daughters, Susan (David) Engum of Savage and Patricia Wood of Winona; a son Howard (Cindy) Coleman of Roseville; eight grandchildren, fifteen great-grandchildren, six great-great-grandchildren and her special niece Marilyn Haugen Christensen of El Paso. Preceding her in death were her parents, her husband (who died in 1991), her sister Marion, and two daughters Beverly Jeanne and Joyce Coleman.

Special thanks to the staff of The Cottage and Hospice of the Red River Valley for the kindness and care they gave to Mavis.

To order memorial trees or send flowers to the family in memory of Mavis Pearl Coleman, please visit our flower store.