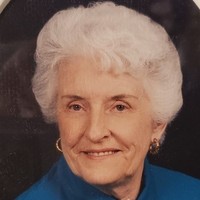 Millie was born on October 23, 1923 on a farm in Mahaska County, Iowa to Dave and Georgia Speas. She married the love of her life, Ron, on April 24, 1943 in Minneapolis, Minnesota. They were 18 and 19 years old. They shared 68 very happy years together, most recently as avid fans of the Minnesota Twins. Mildred was an exemplary caregiver, always reaching out to help others with greater needs. Her great heart was especially visible for several years as she lovingly spent much of every day caring for her husband as he struggled with serious health issues. In earlier years, they both enjoyed dancing, frequently active with square, round and ballroom styles. One of their favorites was Stardust by Glenn Miller.

Mildred graduated from Montezuma, Iowa, High School where she was a cornet instrumentalist in the marching band and orchestra. She also played “Taps” at three cemeteries.

In addition to raising two children, she held numerous administrative positions with organizations such as Mayo Clinic, IBM, a law firm, commercial bank and the Selective Service.

Millie and Ron moved to Detroit Lakes in 2005 and made their home at The Madison. Mildred’s religious faith was especially important to her, as demonstrated by her active service with women’s groups of the United Methodist Church and other church organizations. Her favorite hymns are “Beyond the Sunset” and “In the Garden.”

Funeral Services for Millie will be on Monday, December 2, 2019 at 11:00 am at Ecumen - Emmanuel Nursing Home in Detroit Lakes. Visitation will be one hour before the service. She will be interred beside her husband, Ron, in Montezuma, Iowa at Jackson Township Cemetery at 2:00pm on Wednesday, December 4, 2019.

In lieu of flowers, please direct memorials to Ecumen-Emmanuel Nursing Home or Hospice of the Red River Valley.

To order memorial trees or send flowers to the family in memory of Mildred Moitzfield, please visit our flower store.