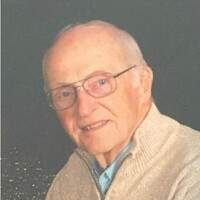 Otto Evenson got called to heaven on August 23, 2022. He died in his home at Ecumen Housing in, Detroit Lakes, MN. He was born on February 24, 1928, on the family farm near Mayville, ND, to Even and Liv Evenson. Otto attended and graduated from high school in Mayville. Otto served in the U S Army in Korea. Upon returning, he attended Mayville State College, where he started dating Donna Severson. The couple married on December 27, 1953, in Mayville, North Dakota. He taught within several North Dakota schools and ended his career as a state educator at West Fargo High School, where he was Head Principal from 1965 until 1968. He then worked at NDSU in the Division of Independent Studies; from there, he went out on his own and established a business named Dakota Assembly Talent Service, which provided school assemblies in the region. Otto was an active member of the First Lutheran Church in Detroit Lakes. He was also an active member of the VFW in West Fargo Post 7564, served as Post commander in 1982-83, and worked as North Dakota State Commander in 1989-90. He enjoyed traveling, gardening, living at the lake, and visiting friends and family. His friends and family love Otto deeply, and he will be missed. He is survived by his grandson, Eric Evenson, and his nieces and nephews. He was preceded in death by his wife, Donna, his son, Paul, his daughter-in-law, Jean (Schuder) Evenson, and his three eldest brothers: Edwin, Ralph, and Marcus.