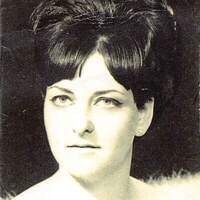 Patricia Darlene Amundson was born July 27, 1947 in Ashland, WI to William and Willie (Rowe) Gosselin. She grew up and received her education in Superior, WI, graduating from Central High School. On June 28, 1980 she was united in marriage to Larry Amundson. They made their home in Superior. Over the years they lived in Dilworth and Pelican Rapids, MN before moving to Detroit Lakes in 2015.

She is survived by her husband Larry; mother, Willie (Billy) Thompson; one daughter, Dessa Simcik; five stepsons, Troy, Mike, Jason, Joel, and Brent; one stepdaughter, Cheri; many grandchildren; and one brother, Joe Gosselin.

She was preceded in death by her father, William Gosselin; and one brother, Terry Gosselin.

To order memorial trees or send flowers to the family in memory of Patricia Darlene Amundson, please visit our flower store.