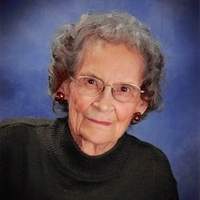 Rhoda Barbara Hanson was born on May 18, 1927 in rural Callaway, MN to Ben and Celia (Schauer) Schultz. She grew up as a farm girl helping with all aspects of farm and garden work. She attended District 101 Country School and later graduated from Waubun High School, class of 1945. Following high school, she was employed as a payroll clerk at American Gas Machine Co. in Albert Lea, MN.  While in Albert Lea she met Vernon Hanson. They were united in marriage on June 12, 1949 in Ogema, MN. They made their home in Fergus Falls and Detroit Lakes for a short time before moving to Moorhead in 1950. Rhoda then began a long career with the Clay County Highway Dept. as an accountant and later as office manager. She retired from there in 1983.

She and Vernon had a summer home on Detroit Lake for many years, which was a special place for family and friends, providing many happy memories for all. They moved to Detroit Lakes in 1995. Rhoda kept a daily journal for most of her life documenting weather, her activities of the day, and newsworthy events. Rhoda was always there to help others, including her parents as they aged. She also enjoyed traveling. Some of her most memorable trips included, Pikes Peak, The World’s Fair in Seattle, fishing in Canada, and various trips to Alaska. Rhoda was a person that was quietly comfortable with herself.

Private Family Graveside Services will be held at the Oak Grove Cemetery in Detroit Lakes, MN.

To order memorial trees or send flowers to the family in memory of Rhoda B. Hanson, please visit our flower store.