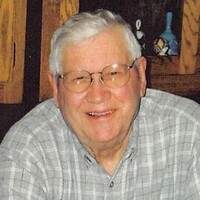 Robert Louis Marine was born October 12, 1926 in Wyndmere, ND to Earl and Lida (Jensen) Marine. He grew up and received his education in Wyndmere, graduating from high school in 1944. He then served in the United State Navy from 1944 – 1946.  On January 1, 1948 he was united in marriage to Gwen Kubela in Wyndmere, ND. They made their home in Wyndmere, where Bob ran the family Hardware Store with his mother. They moved to Fargo, ND in 1951, where he worked as an electrician for his brother in law for several years. He later worked for Dakota Electric for many years, retiring from there in 1989. He also worked on the missile silos near Grand Forks, ND. They moved to Detroit Lakes in 1979. Bob was a member of the International Brotherhood of Electrical Workers since 1952.

He was preceded in death by one brother, Don Marine and his parents.

To order memorial trees or send flowers to the family in memory of Robert Louis Marine, please visit our flower store.