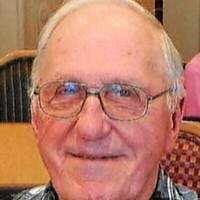 He was born on January 13, 1934 to Bernhard and Lena (Neske) Wendt in Perham. He was baptized and confirmed at St. John’s Lutheran Church – Height of Land in rural Frazee. Roman attended Country School District 76 and Frazee High School. He helped his parents on their farm by cutting pulp wood, firewood, and picking potatoes. Roman began his service in the United States Army in 1956 and was honorably discharged in 1958.

Roman married Marian Quittschreiber on June 16, 1957. After his discharge from the Army, Roman worked at Kershner’s Construction and Lakeland Turkey Plant. In February of 1960, Roman and Marian bought a farm in Height of Land Township and built a retirement home in 1990. He farmed until 2004 and then sold the farm to his son, Allan.

Roman was a life-long member at St. John’s Lutheran Church – Height of Land and served in various positions. He enjoyed traveling, playing cards, games, bowling and especially dancing to Polka bands. He enjoyed helping Allan on the farm and spending time with his family.

A Graveside Service will be held at 2:00pm on Friday, July 31, 2020 at St. John’s Lutheran Cemetery – Height of Land. Visitation will be 5pm-8pm on Thursday, July 30 at West-Kjos Funeral Home in Detroit Lakes.

To order memorial trees or send flowers to the family in memory of Roman J. Wendt, please visit our flower store.