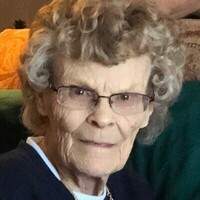 Shirley was born on February 27, 1929 in Omaha, Nebraska and was the oldest of four children born to George and Edith (Munson) Leiser. Shirley moved often as a child due to her father’s employment with Western Electric, until they finally settled in Duluth. Shirley graduated from Duluth Central High School in 1947. Shirley was married to the love of her life, Neil D. Bloomquist on October 2, 1952 in Duluth and they moved to Detroit Lakes in 1956.

Shirley was a stay at home wife and mother of three children. She enjoyed gardening, canning, caring for her many flower beds, sewing, and crafts. She loved to decorate for all the holidays, but Christmas was the most special. She loved making Christmas stockings and tree skirts for everyone.

Shirley enjoyed bowling for over sixty years. She was the Detroit Lakes Women’s Bowling Association Hall of Fame recipient in 2011 and was the bowler of the year in 1990-91. After a stroke at the age of 80, her crafting and bowling ended, but that did not stop her. Shirley enjoyed bingo, the casino, and watching the Twins and Vikings. She was a member of First Lutheran Church, American Legion and VFW. Most of all she enjoyed spending time family and friends.

Shirley moved from her home on Floyd Lake in September 2017 into Lincoln Park Assisted living, where she made many new friends. In April 2020, Shirley moved into Oak Crossing due to health issues.

She was proceeded in death by her parents; husband, Neil in 2013; sisters, Donna Malmros and Delores Edwards and her brother Bob Leiser.

The family would like to thank all caregivers from Lincoln Park, Oak Crossing, Hospice of the Red River Valley, the Senior Care Team and Chaplin Kurt Jacobson for everything they did for mom to maker last few years of her life be the best that they could be.

Due to Covid-19 a private burial was held September 14, 2020 at Oak Grove Cemetery, Detroit Lakes.

To order memorial trees or send flowers to the family in memory of Shirley Bloomquist, please visit our flower store.